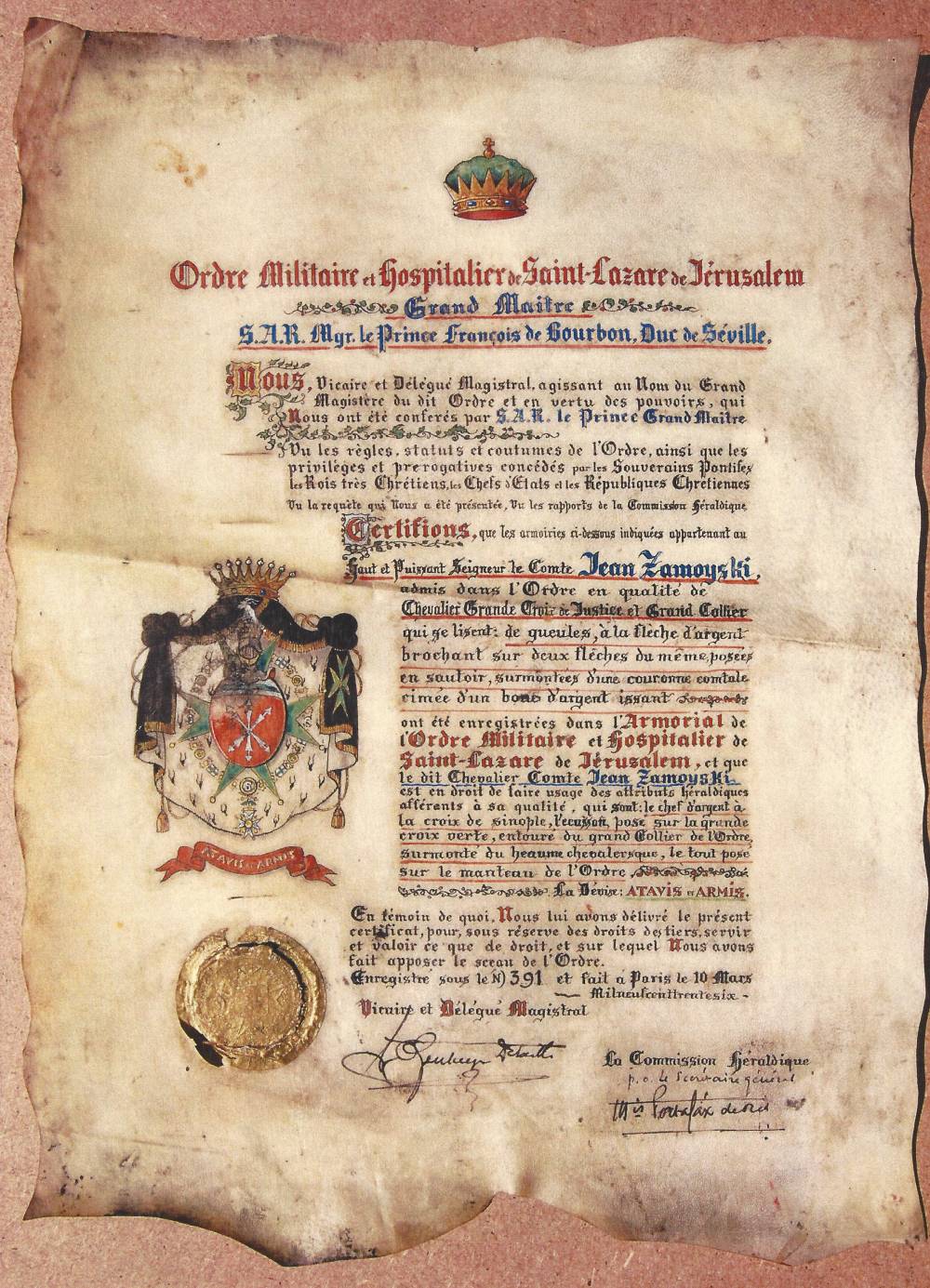 The Castle Stará Ľubovna – museum preserves several objects after the Zamoyski family. In the year 2016, the museum re-installed an exhibition dedicated to this family, focusing on princesses from the de Bourbon family. However, the exhibition does not push Andrew and John Zamoyski into the background. One of the most important collection items concerns the younger of them, namely the original of the Nomination Decree of John Kanty Zamoyski as a member of the Order of St. Lazarus of Jerusalem.

Knightly and charitable order of St. Lazarus of Jerusalem

We, the Vicar and the Plenipotentiary, acting on behalf of the High Representative appointed by the Order and in accordance with the powers conferred on us by His Majesty the Prince High Representative with regard to the rules, statutes and customs of the Order, as well as the privileges and privileges conferred by Popes, Christian kings Christian States and the Republics, in view of the request made to us and in relation to relations with the Heraldic Commission, we confirm that the coats of arms of the mines here belong to the high-ranking and powerful lord Earl John Zamoysky, admitted to the rank of Knight of the Grand Cross of Justice and Grand Chain, which are read: on a red field interwoven with silver arrows are crossed two identical arrows above them is a princely crown and above it is a silver head of a capricorn, were registered in the collection of coats of arms of St. Lazarus of Jerusalem, and that the aforementioned Earl John Zamoyski has the right to use heraldic insignia belonging to his rank, which are: a silver shield head with a green cross, a label placed on a Grand Green Cross, surrounded by a Grand Chain of Order, above it is a knight’s helmet, and all this is laid on the mantle. Motto: Atavis et Armis – ancestors and weapons.

As a testimony, we gave him this certificate so that, without rights for third parties, it could serve and be validly valid, and to which we gave the seal of the order.

Registered under number 391 and drawn up in Paris on March 10th one-thousand nine-hundred and thirty-six.

The Military and Hospital Order of St. Lazarus of Jerusalem is an international Christian knighthood whose history dates back to the time of the Crusades. The origin of the military and hospital order of St. Lazarus of Jerusalem dates back to the 11th century. In addition to participating in military operations to protect Christian pilgrims, the Knights also cared for people affected by leprosy. It was this charitable dimension that remained in the order even after returning to Europe in the 13th century. The order had royal status and was based in Boigny near Orleans. It was always been an independent knightly order. Order was active mainly thanks to the protective wings of the French crown, and so in addition to hospital activities, they also liked to operate a military academy for the needs of the French royal army. The original order was active until 1830, and its fate was still unclear. According to one version, it disappeared, another version says that it was led by a council of officers, and in 1841 the protector of the order became the Melchite Greek Catholic Patriarch of Jerusalem. However, around 1910, groups of people appeared in France, personated under the name of St. Lazarus. Subsequently, in 1930, Don Francisco de Borbón, Duke of Seville, was elected Provisional Governor General, and in 1935 he became the new Grand Master. Thus began the modern history of the order.

The symbol of the Order of St. Lazarus is an eight-pointed green cross with all arms equally long, identical in shape to the Maltese cross. The green color of the cross symbolizes the original mission of the order, namely herbalism and healing. Order has its own coat of arms, flag, insignia, ordinary clothing, customs, traditions and structure. The order is headed by the Grand Master, followed by the Constitutional Council, the International Order Government and the Grand Council.

The Order is represented in individual states through Grand Priors, commissions or delegations. From 1937, the activities of the council were renewed in Czechoslovakia by Prince Charles VI. Schwarzenberger and thus the Czech Grand Prior were established.

Order of the St. Lazarus in Slovakia

The first mentions from the Order of St. Lazarus in Hungary date from the 12th century. The tradition is very long, that way the conditions for their activities even today have been created in the past. In Slovakia, Count John Kanty Zamoyski became a member of the order in 1936. At the reception ceremony in Paris, Count John Zamoyski received ordinary clothing (white trousers and a white cloak with the emblem of the green Maltese cross), a gold-plated chain and a diploma of a member of the Order No. 391. He later became a great priority for Poland within the council.

In the period 1918 – 1993, John Kanty Zamoyski was the only member of this order in Slovakia. In 2002, various organizations started operated in Slovakia referring to the Order of St. Lazarus. In 2011, the Slovak Command of the Czech Grand Prior of OSLJ was established, under the patronage of the French Royal House. As it was drawn from the historical legacy, the Order of St. Lazarus focused their basic work of volunteers, on the medical assistance service at Catholic pilgrimages, or on other important social events. 96/5000 For this purpose, the humanitarian organization Help of Lazarians – Receptória was established in 2011. The Slovak Command has the status and legal personality of an organizational unit of an international non-governmental organization.

For more information on the activities of the Order in Slovakia, we recommend looking at their official website: www.st-lazarus.net, www.st-lazarus-gp.sk .